Happy weekend before Christmas! I worked today and am hoping it’s my last day before maternity leave (since we’re off Monday and Tuesday)! Fingers crossed!

I don’t feel like our lives will be changing in hopefully the next few days and it’s such a surreal feeling trying to believe it all! Let’s get into how it’s been the last few weeks… it’s been a bit rough!

Size of Baby: A Pumpkin – and boy it feels like it!

Gender: We’re SO close to finding out! Or so I’m hoping…

Weight Gain: Ooph – I’m up to 40 pounds… My swelling has been a bit crazy the last few weeks and I gained about 4 pounds in the last week. I thought I’d max out at 30 pounds so 40 is a bit crazy to me!

Maternity Clothes: Wearing both still! Somehow I can still fit into my sweaters and some pre-pregnancy tops. Pants are only maternity leggings – I think I wore maternity jeans twice?! But I basically only wear leggings (maternity) because that’s all that’s comfy!

Nursery: The nursery is all done finally and it’s really sweet. It was fun being able to share with the girls at my cookie party last week! It’s quiet, serene and comfy! My inlaws were in town last weekend and they were lucky enough to sleep in there – with an air mattress of course (the basement is SO close to being done and well have our guest bedroom(s) back!).

Movement: ALL THE TIME. I love this  and don’t at the same time. The baby  has been up in my ribs for quite some time but baby is also A LOT bigger than he/she was when they first started up there. So now, it’s beyond painful. I’m talking 24 hours a day of pain and it doesn’t subside. At my last appointment on Tuesday, I told the doc that he/she must be stuck in my ribs or something and somehow we need to get the baby to move!! He said the baby is most likely separating my ribs and the tendons are tearing quite a bit… The doctor also noted that normally babies slow down by now and aren’t moving as much but lucky for me, Baby G is making room on his/her own since he’s running out of it! When I feel where it’s killing on my ribs, I can feel him/her moving around!

Symptoms: See above for the wonderful pain I’ve been feeling. I mean it doesn’t stop! My heartburn has been the same as previously as well – unfortunately the pills he prescribed aren’t working as well – so it hasn’t been the most fun! My feet and ankles really swelled up the last week as well – so much so that he had me tested for preeclampsia just to be safe because of my pain and feet! I’m full after the smallest of food and then feel so sick afterwards 😦 I feel like if the baby would just drop more and I had relief on my ribs then I could definitely go longer but man, this last few weeks has been pretty rough and I’m READY for baby to be here!

Sleep: Thankfully, aside from having to pee a few times a night, I’ve been able to sleep pretty well. I’m usually SO exhausted throughout the day so by the time we go into bed, I’m passed out pretty quickly! It’s getting a lot harder (and more uncomfortable) to roll from side to side though with my big belly! Just SO much weight!

Cravings: Nothing new this week – still craving pizza and all the sweets!

What I Miss: I miss having a glass of wine and feeling normal! The rib pain has really gotten to me the last 2 weeks and I can’t wait to feel some relief – although then I’ll be sore and hurting in another place once that happens so we’ll see which I think is worse! I miss being able to bend over and it not hurt as well as wear normal shoes or boots!

Best Moment This Week: Knowing there’s an end in sight, or hopefully! I can’t wait to meet Baby G and I really hoped he/she would make their appearance on their own before 40 weeks… however, that doesn’t seem to be the case! I’m still not dilated at all (not even to 1/2 cm) and while I know everyone says, including my doctor, that you don’t have to be dilated for anything to happen or start but I don’t have too many contraction and I just don’t think it’s happening on it’s own! My next appt is Monday and he’ll check again if I’m dilated and if not, he said he’d send us over to the hospital that night for cervical ripening BEFORE an induction.  The cervical ripening happens for about 12 hours – so he said to be prepared to be at the hospital for 2-3 days BEFORE a baby comes – which is rough 😦

Looking Forward To: Meeting Baby G!! Finding out baby’s gender and seeing who he/she looks like! Finding out  how big Baby is (I feel like he/she is HUGE!!) and being done with pregnancy and all the rib pain! No joke, it’s been rough lately!

Thanks for sticking with me through this journey! I can’t believe we’re almost to the end of it and beginning the best one yet – being parents! We’re just in the waiting stages AGAIN but hoping next week, we’re at the end (or this weekend??!).

I can’t wait to share Baby G with you all and the nursery, my hospital bag (which is currently in the back of the car ready!) and all the things 🙂

Have a great weekend and Merry Christmas! Let’s hope the next post is sharing Baby G!

I love making gift baskets for people for any occasion; engagements, birthdays, weddings, etc. But when it came to pregnancy baskets or for moms to be, that was harder for me. Partly because of the season of life we were in with trying so hard but also because I’ve never been a Mama so it was hard to know what one would want!

I’m constantly asked “what can I get someone who is newly pregnant to show how excited I am?!” and I just love that y’all are thinking of others and how you can celebrate them! I’ve been meaning to share this with everyone so they can get some ideas and inspiration but #pregnancybrain

My sweet friend, Steph surprised me with this cute care package after we told them I was pregnant! We have been so fortunate to have some really great friends who have been SO supportive of our journey to become parents!

How cute is this mom-to-be care package?! She picked things that she used throughout her pregnancies and things that would be beneficial to me! And who doesn’t love a sweet gift package??

Everything in it was so thoughtful and totally practical and it was just so fun to go through! 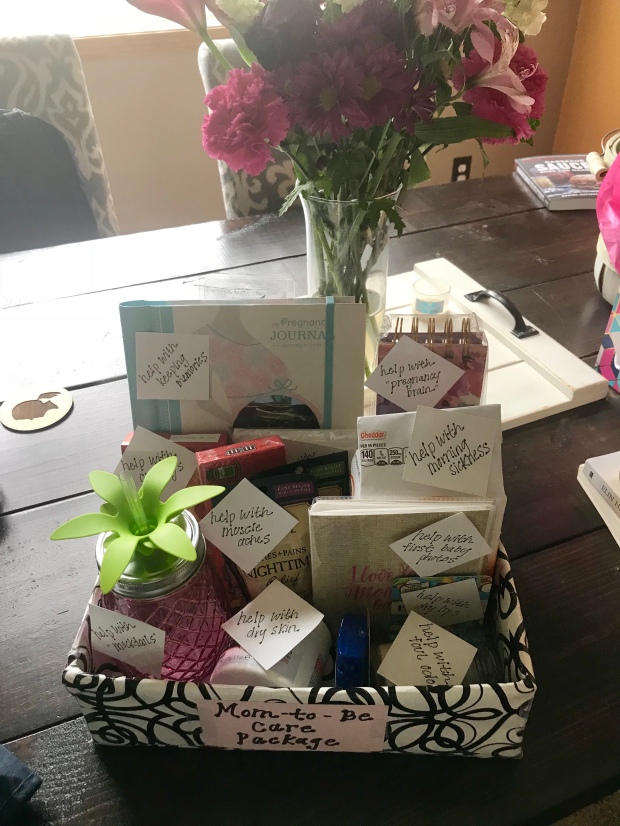 Cute pineapple cup for mocktails (and it’s Lilly colors even!!)

Travel tums – to help with heartburn

Chapstick – to help with dry lips

Candy – to help with cravings!

Candle – to help with foul odors

I haven’t been the best at gifting others with these cute baskets but it’s on my list for what Mamas-to-be would love!

Have you made baskets like this and if so (or not even!) what else did you include?! Or what else could be included for future Mamas?